Once more, the Chatmouettes perform the ride to Chambord. This time, a young Chatmouette joins us for this trip, Minna, Shazen’s daughter. Today is her first ride as a Chatmouette, and also, the first initiatory test to become a real Chatmouette!

Under the sun, we leave Blois and take the Jacques Gabriel bridge. Out of habit, we stop to take a picture in front of the Loire. 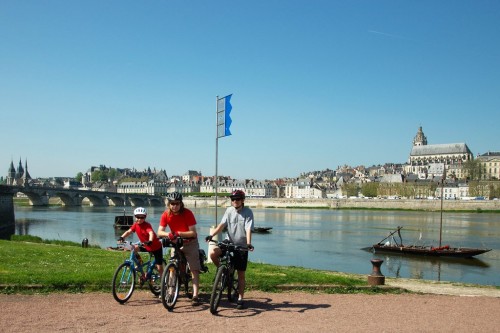 Then, we go along the Loire for a bit until we join Vineuil. This part is not really interesting because it is in city centre but it doesn’t last long, fortunately.
We go on our road and get to a downhill a little bit further on the road which goes to Mont-près-Chambord. Here, usually, we follow the road to the bottom but not today ! Indeed, Shazen, thanks to his sharp-eye, makes us notice that the route to Chambord goes by a small path on the left. Yes, hidden behind an electricity pole is a road sign of “the Loire by bike”. Because of this bad visibility we have never seen this road sign during our previous trips toward Chambord (first ride, second ride)!
Maybe it’s due to the fact that we are taken by the speed …
So, cyclists friends, if you go to Chambord, pay careful attention to this road sign. 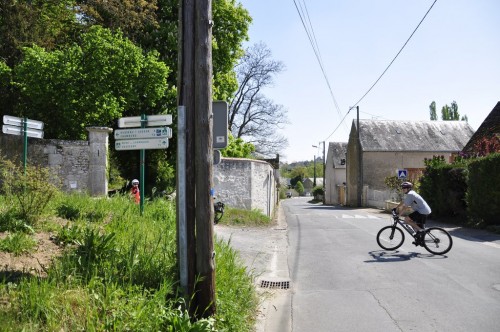 It will be a real shame to miss this path as it takes us to green surroundings with lots of interesting things to see. Like this building : 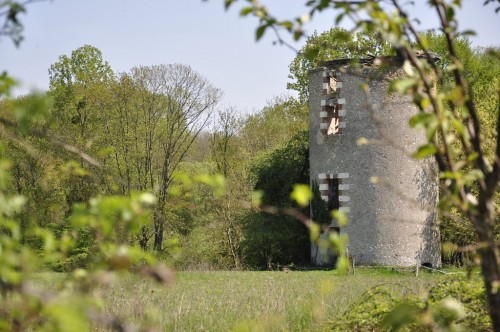 What on earth is this building ?

Is it a Dungeon, a silo, a pigeon loft or a house ? The mystery remains, unless you know what it is!
But just a little bit further, another surprise is waiting for us : a circus ! 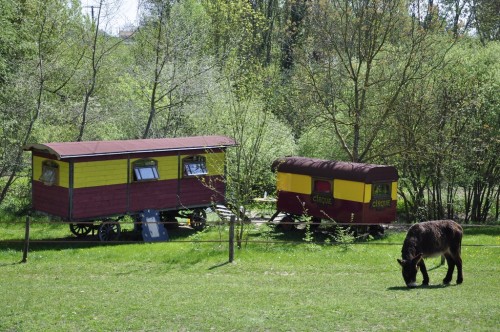 It is, at least, what we thought when seeing the caravans, donkeys and horses …
But when getting a little bit closer, we learn that it is, in fact, a gîte of caravans ! Well, appearances are deceptive.
For more informations on this strange gîte, check the website www.lesroulottes.fr 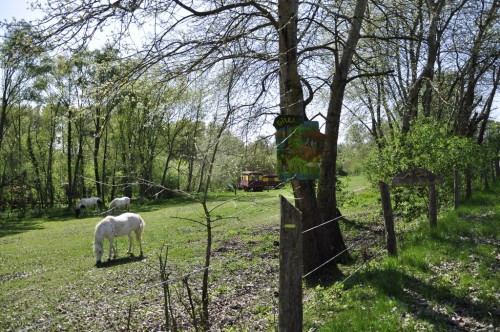 A gîte of caravans, it's original ! 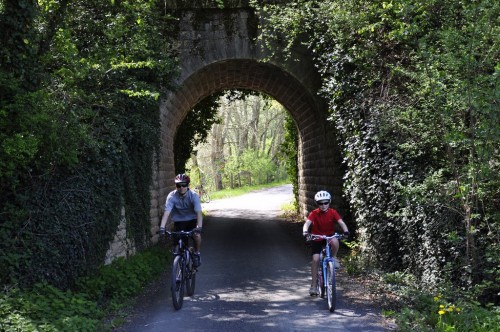 The way through the tunnel

We go on the road which follows the Cosson by passing through a little tunnel, and cycle a bit further in the middle of vines. We get to Huisseau-sur-Cosson that we cross without lingering behind, really. A few kilometres further, we arrive at La-Chaussée-le-conte, which is also the west entrance of Chambord’s park. In fact, we have never gone by this entrance until now. 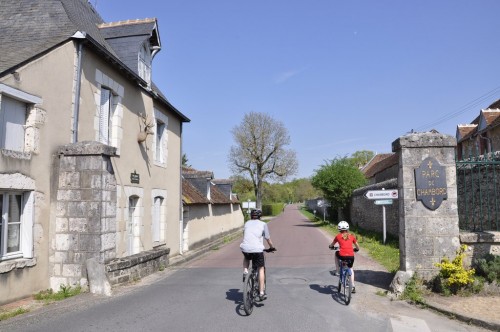 The west entrance of Chambord's park

The road that goes to the castle follows partially the same lane than the cars so vigilance ! However, it is a path through the woods, which is pleasant.
We decide to go in the big park in the south, in front of the castle. Despite the nice weather, there isn’t a lot of people outside. Maybe most of them are inside, because the car parks are full !

Anyway, it’s time for a snack ! We are at about halfway of our journey and Minna, for her first ride is doing very well because she manages to follow the pace without showing signs of tiredness. Sometimes, it’s even Minna herself who gives rhythm !
However, there’s still a few details to review for the next rides, especially, regarding the management of biscuits : “the wrapping has to be removed before eating the biscuits !”. Doesn’t it Minna ? 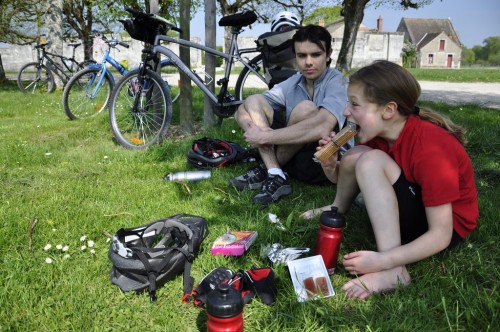 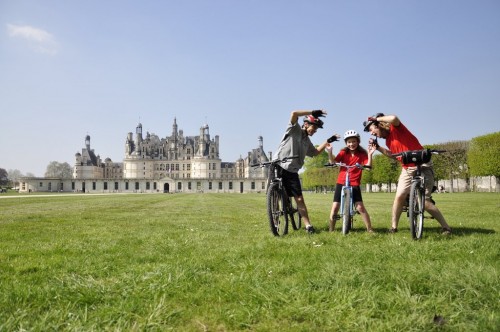 The Chatmouettes after snack break

After this break, we head toward the ice-cream vendor not too far, just to indulge ourselves before continuing. From there, we catch sight of odd visitors from the future … 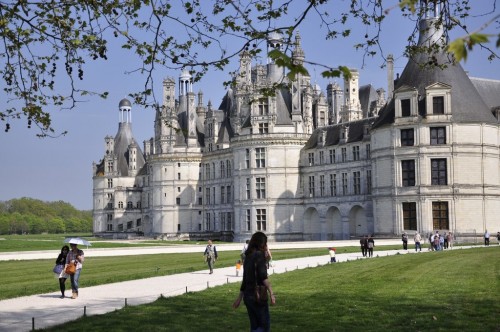 An umbrella or a parasol ?

In front of the ice-cream vendor, we are spoilt for choice. But in the end the flavours raspberry, strawberry, pistachio are the ones that win the day. “To your ice-cream ! Ready, steady, go !”.
Second point to review for Minna, the management of ice-creams. Indeed, the ice-cream cone is quite often sly, and it requests control. Poor Minna, she bears the brunt of it when her cone bursts, letting the raspberry ice-cream ball, having hardly been touched, crash on the ground. Now, it was the turn of Shazen and Stoumik to burst out laughing !
Well, we have all known this time of loneliness in our childhood, no ?

After this really good laugh, we go back on our road following the direction of Saint-Dyé-Sur-Loire. The path makes us go through a pine tree forest where we see funny creepy-crawlies. 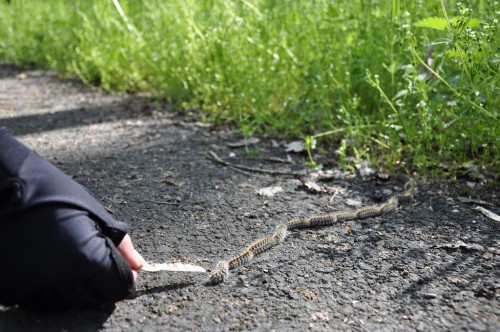 Caterpillars that follow each others in single file, it’s quite curious ! It is in fact the Pine processionary, a moth which seems harmless but can be dangerous, because it has urticating hairs. So be careful if you cross the path of this kind of procession on the forest roads.
We go on our path and arrive at Saint-Dyé-sur-Loire, it’s a village we are used to go through (cf the ride to Muides-sur-Loire). Besides, it is really appreciated by the Chatmouettes. We join the course of the Loire and take the direction of Blois, about 10 kilometres away. On this path, we see lots of cyclists, it’s quite a good sign. But suddenly, we catch sight of a mysterious object on the isle from the opposite bank, on our right. How this armchair made it there ? It’s a mystery ! Maybe you will be able to help us by giving us your own explanation (by leaving a comment). 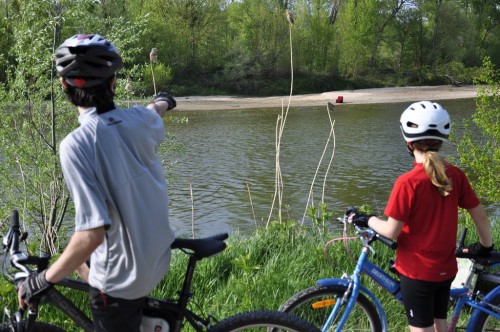 Look there ! A red armchair

We follow the route of the Loire by bike until Blois, catching sight of swans on the way.

Finally, to enthrone Minna to the rank of Chatmouette and also to conclude this day full of surprises, we need to do the ultimate test : the raclette 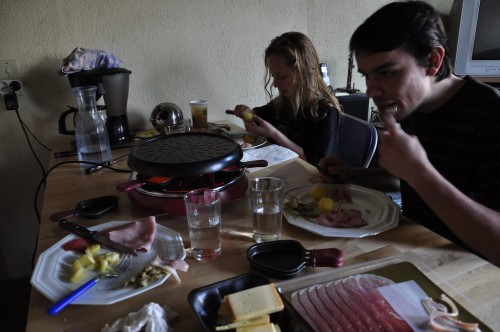 The raclette, last test of the day