By Les chatmouettes on 9 October 2010

And make it two ! For this new ride, we have decided to do the route of Chambord again. Indeed, a 3rd member had joined us for this trip and what’s best than starting by Chambord’s castle. What can we say ? Royal !
So, William, our guest of a day joined us for this route. At the beginning of the afternoon, as we are used to, we leave Blois in the middle of the traffic by cycling alongside the Loire for a few meters. Then passing the secondary road  D174, from underneath of course, we are on the way to Vineuil.
After this stage, the aim is to get to Huisseau-sur-Cosson by turning off towards Cosson’s bridge, and following the river upstream. But well, the fantastic team that we are is sometimes lacking of attention, and so, we miss the right way when going toward Mont-près-Chambord. Does it remind you something ? Anyway, after cycling for about 4km in that direction, we finally realise it is the wrong way … Luckily, with a map, a GPS (thanks William), and 3 brains, we are ready to get down to the job with a rescue plan ! This one consist of rejoining the lane of “le Roi de Pologne” (the King of Poland), in the middle of the national forest of Boulogne, do not mix up with the woods ! 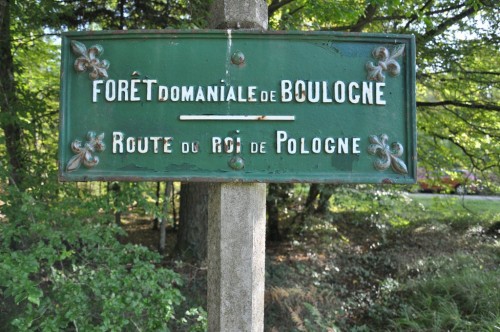 Yes indeed ! We are on the road of "le roi de Pologne"

So, we have intentionally turned off our “official” route to cut across the forest, by small paths. 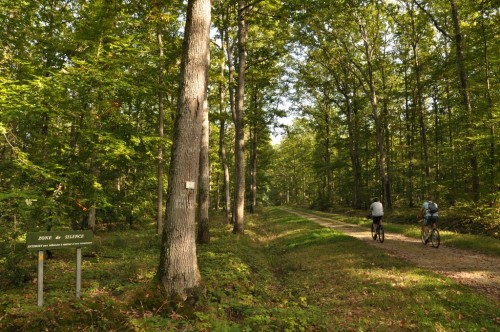 Phew ! Luckily we didn't have a transistor !

But, it was funny, because we found ourselves face to face with strange and mysterious creatures in the middle of the woods : the gatherers of mushrooms. Indeed, we can say it was a good day to go picking, as there was a mushroom galore.
We go on our trip until the crossroads of Chambord, where we cut the secondary road, that we cross, then the crossroads of Wagram. Here, we go toward the castle on our left, in the north, and we continue on a path during about 5km. By the way, we cross the outer wall of the biggest enclosed forestry park of Europe, 33 km long. 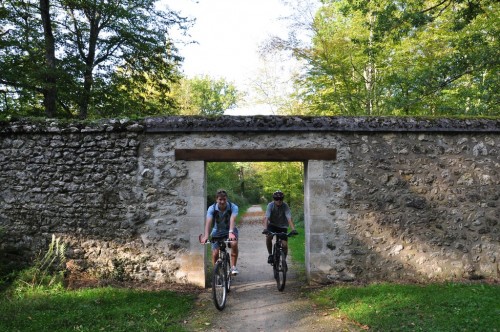 Be careful ! We get inside the lands of Royal hunting ...

Here ! We are there. We reach Chambord so we enjoy a break. 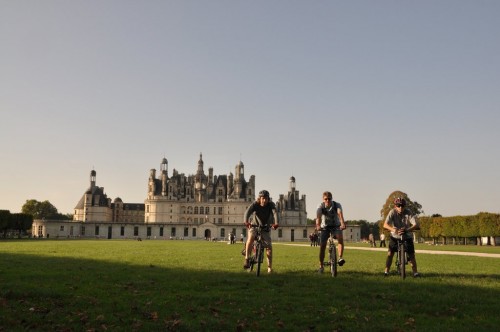 The splendour of Chambord just behind us

After this short break, we start off again, passing close to the bars and restaurants adjoining the castle. And, on the way, coming across a married couple, we go on toward Saint-Dyé-sur-Loire. But we won’t go farther, for the moment at least ! Because a group of hot-air balloons are just right on our path, lying out, half inflated, on the ground. So, we take advantage of this occasion to stop the bikes, and take the time to watch them blow up gradually, under the effect of hot air, then watch them take off and go up quickly in the air. 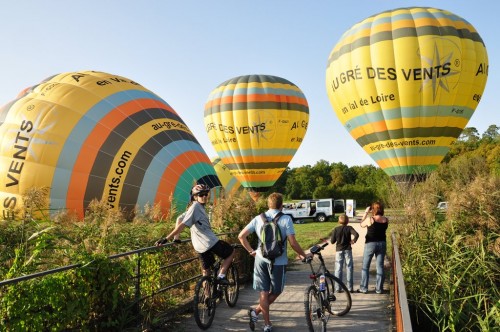 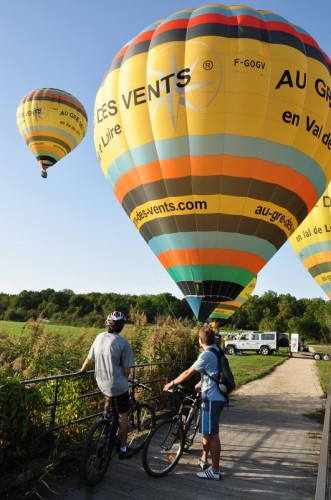 Ready to take off ! 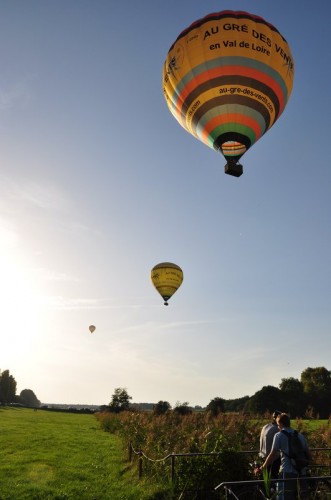 Here we go ! The 4 hot-air balloons have freed our path, we can now go back on the road toward the pavilion of Saint-Dyé-sur-Loire, situated at the level of the castle’s park outer wall, then a few km later, Saint-Dyé-sur-Loire.
From here, we get back to the Loire and the path alongside it until Blois. During about 20km, we follow the natural course of the longest river of France, toward the south-west, with the sun abandoning us little by little. By the way, we meet a Heron which doesn’t care at all about hitting the pedals, but well …
We arrive in sight of Blois, and, from the Loire’s bank, we take the Jacques Gabriel’s bridge which takes us about 100 metres farther at the end of our journey of a day, at nightfall.